1/24/2022
Folks, I am blown away. It been over 10 years since I posted this random bit of info I discovered on a long-gone piece of hardware for an end-of-life OS and I am still getting comments from people able to apply it to today's software. Blown! Away!
Yes, this fix reportedly works on Windows 10 according to the latest comment from a user. I love hearing the success stories!
I wonder about Windows 11?
8/20/2017

Six years and still getting reports that the fix is still helping others get the most from their hardware! Please keep the comments coming as I love reading the success stories!

By popular demand, here's a couple of how-to links on editing the registry.

And George T. has a provided another link to the  drivers
https://extranet.toshiba-tro.de/en-us/supportquality/bluetoothinfopage/news/downloadtoshiba.aspx

Thanks for the kind works and be sire to read thru the feedback comments below for updated and improved information. I have long since retired the laptop so I can't offer new info or insight, but I love hearing the success stories!

I am gobsmacked that this site is still getting traffic and still helping people get the most from their bluetooth.  Thank you so much for the updates and feedback on working configurations as you discover them. Please keep the comments coming- they make me happy knowing others are still benefiting!

Original post below:
For those running Toshiba's bluetooth stack and encountering the infamous 'License has expired' message, I have a workaround that seems to be working.
After downloading version 8.00.12(T) of Toshiba's BT stack (from Toshiba Bluetooth Portal), I began getting this message:

I did a little digging and found that this was quite common. Now, my BT adapter from Dell in my Inspiron 9300 is made by Toshiba. I used the last version of the stack without problems. So...I want my BT back. 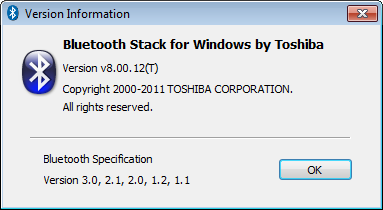 This key will probably have to be added to each user account on the computer that need BT functionality.
Posted by Mike at 7:12 PM 131 comments

Dell doesn't support the I9300 under Windows 7. It runs W7 just fine. After install, go to the Windows Update site and let it download the drivers for the x300 video card from MS. The touchpad driver I found that works with the Alps touchpad is from Sony's website. Look for Alps_Touchpad_Driver_7.107.505.102. This is the file I used: Link

The only problem I had was the 'Tapping Off When Typing' option didn't work. I finally was able to get it working by adding an entry to the registry. The needed key is HKCU\Software\Alps\Apoint\Gesture. Add a new DWORD entry called "PalmCheck" (no quotes) and set the value equal to 1. That seemed to do the trick!

Thanks to this posting and user peteostro's postings for help. Link
Posted by Mike at 1:31 PM 0 comments 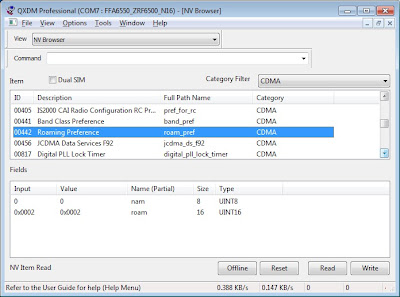 My phone is showing 3-4 bars now (0 to maybe 2 before). The roaming indicator is on, I am able to make and receive phone calls, send and receive texts, and browse the web (1xRTT only- showing about 100k). And the change seems to be persistent after reboots. I was able to revert it by changing my Network Preference back to 'Sprint Only'.
Now- if someone can write an widget that does this, that can be repayment to me for the time and effort I wasted trying to figure this out. Here's a middle finger to you, Sprint and Samsung!
Posted by Mike at 1:22 AM 7 comments