In an earlier post I told how to force roaming with a Samsung Epic 4g on Verizon's networks in area that they don't have 850MHz coverage (TX (except Houston), FL and Chicago).

I am happy to report that a user on xdadevelopers has successfully applied the same fix to a Samsung Galaxy SIII.  See here for the post.

I have the firmware that reader Eriks got from PlayBase and sent to me all packaged up with the flashing tool and drivers ready for download.

It's big- 125MB- and a .zip file.  The firmware is already set up in the ./image directory.  Check the !Readme1st.txt file for instructions.

Download here from 4shared.com and drop me a note to let me know how it went.

Thanks again to Eriks.

Just an update-  the PlayBase is running really well.  I have had an issue with standby battery life.  I remembered that at one point I had bought Juice Defender Ultimate for my Epic 4g phone.  Several f/w later, it's no longer needed or even installed.  How about using it for the PlayBase?

Go to the E4G, re-download JDU [wow- google play keeps track of every app I've download...it's at the very bottom of the My Apps list...keep scrolling...forgot I bought that app...hmmm.....geez....really shouldn't be surprised, but yet I still am...weird...], find the apk and Wifi File Transfer (awesome program, and also AirDroid) it to the PB.  After a little tweaking (you have to go into the advanced custom settings and tell JD not to manage the cell radios (there isn't one, but it'll jack the wifi up).  Battery capacity is 3000 mAh, charger is 2000mA.

Battery life now is much improved.  Now, it doesn't run itself down sitting on the counter overnight.

The PlayBase is back up and running!

Thanks to reader Erik, I now have an updated, more streamlined, faster, Google Market Play enabled and ROOTED Playbase!!!!!  Woohoo!

Eric was able to supply me with a firmware update (supplied to him from Karuma!) that resurrected my PB!

Until I can find space to host the files (about 125MB), email me and I will get you what you need.

Tech Specs of PB for reference:

After several emails, I finally got my 8GB SD card from Karuma.  They were backordered when I ordered my unit.  The first module they sent me got lost somewhere between Singapore and Texas.  The second took so long that Karuma sent a third unit (tracking and signature required on the 3rd one).  The third one arrived about 2 days after the 2nd.  So, I got an extra!  Cool.

Anyway- I popped the unit in and it seemed to be great.  It appears that the SD card gets mounted as a folder under the internal 8GB.  It's also available directly via /mnt/sdcard.

Well, a day or 2 after installing the card, all the apps that were stored on the TF card (internal memory or the SD, I'm really not sure) all failed.  They were visible in the Manage Applications page, but the OS couldn't/wouldn't run them.

At this point, after all my playing and jacking around, the PB was freezing and FC a fair amount, so I decided to do a factory reset.  The SD card was formatted, but the music that I had copied for the kids into the internal memory remained.

Anyway- the tablet seems to be running pretty smoothly and the kids are happy, so for now, my quest has been paused.

As for limiting the kids access to programs and settings they don't need to be on, I found a very nice app called Smart App Protector on Amazon (link) or Google Play (link).

Now- if someone could come up with a way to firewall Android without needing Superuser.apk installed on /system, I believe I would be happy.

Getting closer with the PlayBase

Following this post, I have been able to get into recovery mode.  Be sure to download the RockChip flashing tool at the link and unflash the zip somewhere convenient on your PC.  Plug the PB into a USB port and, using a paperclip, hold the Vol Up button and press reset (hole next to the power button) at the same time for about 10 seconds.  Release them and the PB will reboot into recovery mode.  My copy of Win7 didn't have the drivers.  After the long attempt to find the drivers, Windows will fail gracefully informing you it didn't find the drivers for the new device If you look in the RockChip folder you created earlier, there is a folder called Drivers.  Open Device Manager and find the unknown device.  Update the driver from there pointing it to the drivers folder.  Waa-la!

Important- make a backup! Store it somewhere safe! You have been warned!
Update! It has been brought to my attention that recovery mode can simply be accessed by holding the Vol+ down while plugging the USB cable in.  Wish I had known this when I was flashing mine, as my kids have (literally) worn the reset button out on the original factory firmware.
Posted by Mike at 1:34 PM 3 comments

Drivers and then rooting Karuma's PlayBase

I bought the kids a Karuma PlayBase for Christmas.  I need to root it so I can limit ads that pop up inside a some of the free games and the resulting angst and worry of my better half of what may come up.  Unfortunately, Karuma's online presence (and user community) is pretty non-existant.

The first step in this process is going to be getting root access.  I have to get access to the tablet via USB.  The PlayBase works a a USB storage device if you plug it in to a PC, but there is also an ADB (Android Debug Bridge) port on the tablet that XP doesn't find drivers for auto-magically.  A quick look in device manager and a search on the PID revealed that the HTC Dream uses the same PID.  One quick download and a little editing and I now have 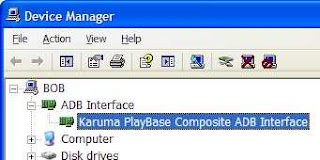 Added 3-31-12:  It looks like the PB is already rooted (# command prompt in the ADB terminal instead of a $).  Now I just have to figure out how to get into recovery mode so I can get an updated su and superuser on it.  The chip is made by Rockchip- it's an RK2918.
Posted by Mike at 2:54 PM 0 comments

My kids love PBSKids.org, but I have a laptop and desktop that has problems with the home page. It starts to open, then clears the page and simply gives me a broken image icon.

I haven't been able to figure out exactly what it is that these computers don't like about the home page, but I have found a work-around that keeps them happy.

Use this link instead- I actually think it's better then going to the home page because it makes finding what you are looking for so much easier!